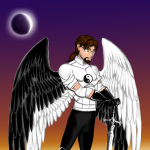 Martin was a Seekers of the Huntik Foundation but when he descover that the fondation want hide the Titans at the public eye he join Guardians of Thor but this group was too hidden so he join The Organization but the organization only want control the world with the titans. then martin join the Blood Spiral Order but the only goal of this organization was destroy the wold.

then martin create his own organization called Equilibrio that mean equilibrium in italian an organization to make the titan and the seekers public.

His fist titan was Madea after the bond he have her amulet like a pendant. madea stay with her seekers for most time in her human form.

According to Martin are not the titans who must adapt to the Finder, but it is the Seeker who must learn to understand each type of titan and bond with him ... The Seeker must learn to become evil to bind to a Titan like Harlekin and become good to bond to a titan like Springer.

To do what the man has developed two spells which are based on those of the Blood Spiral Order , and these spells are called DarkSoul and Lightsoul the first allow the user to bond with evil titans and the second with titans good, and these are based on magic spells Underfear of the spiral.

Retrieved from "https://huntik.fandom.com/wiki/User:Nitram86?oldid=70271"
Community content is available under CC-BY-SA unless otherwise noted.