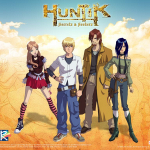 Welcome to Huntik, Ijohn chaotic, and thank you for your edit to the Marauder page!
There's a lot to do around here, so I hope you'll stay with us and keep helping out.

Questions? You can ask on the Blogs or on Talk page associated with our article.

Need more help? The Community Portal and Huntik Help pages have outlines of the site and links to pages to help you learn how to edit. Recent changes will show what pages other people have been editing, and where you can help.

We're very happy to have you here, and look forward to working with you! Please leave a message on one of our admins' talk pages if you need help with anything.

At this point, we're still working on compiling a lot of Season 2 information as it still has limited (legal) availability.
~ The Lhikan 634 (TaLk)

I included several of the reasons in the edit summary section, though a fair deal just needing minor re-formatting of the addition and weren't undoing the edits. I'll quickly go over some of the details below.

Yeah, I've been trying to get that to show properly after I updated the navigation a while back. Yama-Titans are coded into the navigation, but it seem that Wikia's system will only display 7 subcategories there. I'd been wondering if it was just how my computer was displaying it or not. Once I get past my first wave of finals, I can check with Wikia staff on that. (Especially since I think they're one of the more interesting group of Titan myself!)
~ The Lhikan 634 (TaLk)

Retrieved from "https://huntik.fandom.com/wiki/User_talk:Ijohn_chaotic?oldid=46998"
Community content is available under CC-BY-SA unless otherwise noted.