Vigilante is an assassin-like Draco-Titan whose previous Seeker was considered evil. Therefore Vigilante could only bond with a Seeker with a strong dark side, and that is why, after the only known amulet came into the possession of the Huntik Foundation, Vigilante bonded with Den Fears.

Metz believed that Vigilante was originally used by a very evil Seeker and thus would easily bond to a Seeker with a strong dark side. S2E33

Lok Lambert and Sophie Casterwill were tasked to deliver Vigilante's Amulet to Huntik Foundation Dutch HQ. However they were intercepted by the Blood Spiral and Lok ended up dropping the Amulet during a battle on the Erasmus Bridge. Den Fears then fought Harrison Fears for the Amulet, and the Titan sensed and ended up bonding with Den to become his first and primary Titan. Vigilante then fought against Harlekin, but with Den choked and beaten by Harrison and unable to concentrate, Vigilante was sent back to his Amulet. S2E33

Den used Vigilante during the Huntik team's attempt to rescue Focauld Casterwill from Kiel and Marduk in the Cloisters. He was, however, defeated by Marduk's Cerberus. S2E37

Den attempted to invoke Vigilante against Wilder in the Professor's castle but Wilder kicked the Amulet out of his hand. S2E46

At the Blood Spiral Base, after faltering during his final battle with his brother, Harrison, Den sensed Vigilante becoming Powerbonded, reminding him that him not to let his friends down. After invoking Powerbonded Vigilante, Den merged with him using his new Cindercloak ability and fought and defeated Powerbonded Antedeluvian. Before he could defeat Harrison however, Vigilante was disrupted by falling rocks and sent back to his Amulet. S2E51

Den invoked Powerbonded Vigilante in Japan where he fought alongside Powerbonded Baselaird to defeat two Shadow Agent Titans when they arrived at Emi's house. HM#18

Like an assassin, Vigilante attacks with great speed. He excels in sword and knife skills and tends to combine these offensive skills with his agility. Quick and merciless, Vigilante serves his seeker, and if one is not careful Vigilante will take him out fast, with his dual sword wielder.

Vigilante became Powerbonded with Den during his final battle with his brother, Harrison. Using his new Cindercloak ability, Den was able to merge with Vigilante in a similar fashion to how Lok Lambert merges with Powerbonded Kipperin. Powerbonded Vigilante can then separate himself from his Seeker in order to provide protection, such as when he used this ability to protect Den when the ruins of the Spiral Mark started to collapse. Together, Den and Vigilante's sword strikes are powerful enough to defeat Powerbonded Antedeluvian. S2E51 Powerbonded Vigilante's other new abilities include: 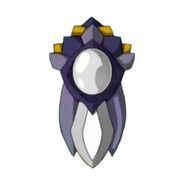 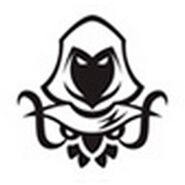 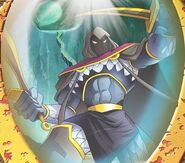 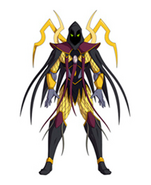