Huntik Wiki
Register
Don't have an account?
Sign In
Advertisement
in: Characters, Seekers, Casterwill family members, Ladies of the Lake

Vivian Casterwill is the granddaughter of Nimue Casterwill. After the death of Nimue, Vivian became the new Lady of the Lake and the owner of the Legendary Titan of Valor, Mythras.

Vivian accompanied her grandmother to the Fortress of Iron Will to reunite with the rest of the scattered members of the Casterwill family. In the ensuing fight against the Blood Spiral, Vivian lost her grandmother, who sacrificed herself to protect the Casterwill family. As the next in line of the House of Blade Makers, Vivian became the next Lady of the Lake. Vivian was subsequently given the Ring of Mythras by Sophie Casterwill to hearten the young girl. S2E40

As a part of the Casterwill-Foundation alliance that fought against the Blood Spiral at the Spiral Mark, she used Mythras in battle. S2E51

Vivian is a young girl who is afraid of the war going on between her family and the Blood Spiral yet, despite this fear, fights with bravery, wishing to help Sophie Casterwill. She has a courageous heart full of resolve, which allowed her to bond with Mythras, the Legendary Titan of Valor. She had a very strong bond with her grandmother, Nimue Casterwill.

Though young, Vivian knows the spells of the Casterwill family as a member of the House of Blade Makers. She has also bonded with the Legendary Titan of Valor, Mythras, who can defend Vivian in dire circumstances.

Vivian and her grandmother, Nimue 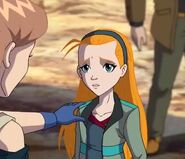 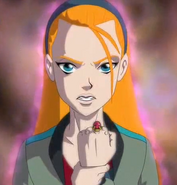