Wolf Knight Titans demonstrate that not all werewolves are simply evil, savage monsters. The Wolf Knight is a noble Titan that is gentle around children and animals yet fierce in the heat of battle. Unlike many other wolf Titans, such as Fenris, Wolf Knight Amulets have not fallen into the hands of evil Seekers.

Wolf Knight, along with his Titan cousin, Fenris, was heavily responsible for the werewolf legends of England during the 1200's. Due to Wolf Knight's abilities, which somewhat diminish his claws, fur, and abilities, the people of England attributed the moon for transforming men into werewolves. Huntik.com

Under the light of moon, Wolf Knight is incredibly powerful, becoming very fierce and dangerous in the heat of battle, the brighter the moon the more strength he draws from it. Full moons being the most beneficial to him. On the new moon however, his claws dull out, his strength diminishes, his fur recedes, and senses are dulled. He loses his power, and is incredibly fragile and vulnerable. Huntik.com

Wolf Knight was designed to be a noble and good werewolf trying to fight his innate rage. His first design portrayed a peaceful werewolf wearing special armor that would permit him to still run with the grace and stealth of a wolf. He was later given more prominent teeth and claws as well as spikes on his armor. His final design gave Wolf Knight more of a tough yet trustworthy ambiance, capturing the essence of the werewolf while keeping a more controlled demeanor. Huntik.com 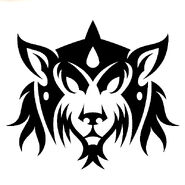 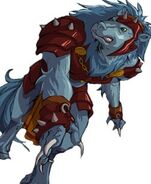