Ymir the Frost Giant is a colossal Litho-Titan similar Metagolem. Ymir is used by the Guardians of Thor to protect the Temple of Thor and Thor's mystic hammer, Mjolnir. The Guardians use the Incantation of Asgard in order to invoke him from his Amulet and to control him.

Ymir inspired the Norse legend of the first Frost Giant, also known as Aurgelmir, whose name meant "gravel-yeller" due to his rough voice. Said to be older than the world itself, he was the father of all other Frost Giants which were formed from his own body. According to the legend, Ymir fought against Odin, the father of Thor, before the earth's creation. Ymir later came back while Odin was in the Odin Sleep and fought against Thor. Wikipedia

The Titan, Ymir, later was invoked by the Guardians of Thor to attack Dante Vale and his team. Ymir summoned an army of Ice Creatures and Frost Minions. His Ice Creatures were defeated by Dante Vale's Ignatius while Ymir, himself, was sent plummeting off of the cliff by a combined effort by Lok Lambert and Sophie Casterwill. Ymir's Frost Minions were later defeated on the Rainbow Bridge by Dante's team, who were joined by Montehue and his assistant, Tersly. S1E07 Ymir later returned to the temple, but quickly was defeated by Dante and Montehue using Mjolnir. S1E08

Ymir has a base attack of 6 and a defense of 5. He is capable of creating an army of Ice Creatures and Frost Minions to fight at his side. Even if the enemy is able to get past this army, Ymir himself is both very durable and very powerful. However, due to his size, Ymir is also slow and clumsy much like the Metagolem Titans. S1E07

Ymir was based on the first Frost Giant in Norse mythology, who was said to create the other Frost Giants from his own body. His power was designed after that of the glacier, slow yet unstoppable, and uses the power of ice. The icicles and stalactites were designed in the shape of a crown to symbolize Ymir's being the king of the Frost Giants. Huntik.com 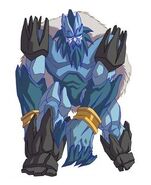 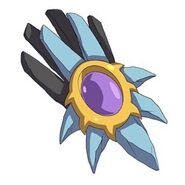 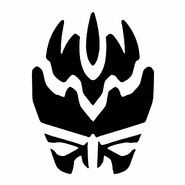