Zhalia Moon is an orphan with a dark past who was raised by Klaus in the Organization. A trained spy and master of disguise, she used her skills for both the Organization and for the Huntik Foundation, eventually choosing to ally herself with her newfound friends in the Foundation. Initially an elegant lone wolf, she found her place to belong among these friends. Her primary Titan is Gareon, a Titan who can become invisible.

Zhalia Moon was originally an orphan until she was adopted by Klaus, an evil Organization scientist. Offered power and a place to belong, she was trained in espionage as an Organization agent. She was given the Amulet of Gareon, and the two quickly bonded. S1E17

As an Organization operative, she was sent as a spy to infiltrate the Huntik Foundation. Originally a rival, she became a member of Dante Vale's team alongside Lok Lambert, Sophie Casterwill, and Cherit. S1E03 She did, however, sustain a bitter relationship with Sophie.

Through her time with the Foundation, she found unexpected friends in both Lok and Dante but was still loyal to Klaus, the one man whom she considered to be a father figure. Turning on her new friends in the castle of Vlad Dracul under Klaus' instructions, Zhalia found herself unable to finish off those whom she considered to be her friends. Though she joined Dante instead of attacking him, Dante was still defeated by Klaus. In a last-ditch effort, Zhalia invoked King Basilisk, using its power to turn Klaus into stone. After the battle, Zhalia decided to leave the team, ashamed of what she had done. S1E17

Zhalia continued to feel guilty over her betrayal and decided to help them claim the Legendary Titan of Body, Behemoth, After posing as an Amazon who wanted leadership of the tribe, she gained possession of the Amulet and gave it to Dante. This marked her rejoining the Huntik team. S1E19

When captured by the Professor, himself, Zhalia claimed herself to be Vensetta Qew, an operative for the Organization. S1E23

During the mission to the Professor's castle, Zhalia remained with an emotionally scarred Dante as the others went after the Professor. When the two found themselves under attack by Undergolem Titans invoked by Eathon the dog, Zhalia's Titans were each swiftly defeated. After Dante came to his senses and defeated the Undergolem Titans, the two joined the fight against the Professor and his Legendary Titans, eventually defeating him. S1E26

She later left the Huntik team to infiltrate the Blood Spiral, here acting as a bodyguard to Harrison Fears. Later, she grew attached to him not only due to her mission, but also because of her liking towards him. S2E35

While undercover, she used a special diary to keep in contact with Dante through the Logosbook spell. When she wrote in her diary, the message was transmitted to Dante's copy of the diary, thus updating the team and the Huntik Foundation about the Blood Spiral's plans. When Tantras took her Logosbook, he noticed that she reported to Dante and commented that she must care for him very much. S2E39

When the Betrayer revealed Dante's apparent death, she became devastated, dropping her disguise and openly revealing her alliance to the Foundation. Although she had previously received a message from Dante saying that they wouldn't be rid of him so easily, she was still shocked when he came back to life by using Copykind on Phoenix's Rebirth ability. After the Betrayer was finally defeated, she returned to the team, last being seen with them on a mission. S2E52

Despite being an expert at infiltration and spying, Zhalia sometimes has trouble masking her anxiety, as evidenced several times leading up to her exposure by Klaus and her subsequent redemption. S1E17 She does not like being pushed around and will do things the way she wants most of the time. Zhalia tries to act strong and tough, but within she was weak until Dante showed her the way. S1E26

Zhalia's crush on team-member Dante Vale began during the mission to recover King Basilisk, who would become one of Zhalia's principle Titans. S1E09 Dante was the first person in her life she felt expressed trust in her, choosing her to deliver the Hoplite Amulets recovered from the sunken Argo. S1E12 Due to this trust, Dante meant more to her that anything else in the world. S1E25

Zhalia also has a strong connection to the Fears brothers, especially Harrison. The two brothers come from the orphanage Zhalia lived in before the Organization, and their situation with the Blood Spiral is very similar to her experience with the Organization. During Zhalia's undercover mission, she was Harrison's bodyguard. This gave her access to information known only to higher-ups and a special relationship with Harrison. Harrison once said that she "was like a sister," suggesting that her bond with him wasn't just out of duty to her mission. Zhalia also had a rivalry with Sophie until the Professor's defeat, where Lok noted they're getting along better. S2E27

Many of Zhalia's choice spells revolve around infiltration and illusory magic, using spells to make her become more agile and to confuse her enemies. When such tactics fail, she is prepared to use every ounce of her fighting power in battle.

Due to her having acted as an agent for the Organization, she learned their spells in addition to basic Foundation spells. She has also learned several Blood Spiral spells from infiltrating the order.

In addition to her powers as a Seeker, Zhalia is also able to perfectly emulate several different accents, including French and Italian. This ability, combined with her expansive disguise kit and magic, allow Zhalia to almost flawlessly conceal her identity. S1E04 She also has vast amounts of knowledge concerning Amazon history and culture which she used to gain the title of "Amazon Queen" from Hippolyta. S1E19 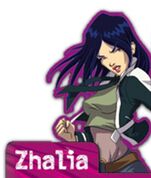 Zhalia as a Suit in the Organization

Zhalia as a Silent Soldier in the Blood Spiral